Skip to content
April 16, 2019 lazyhappymama
So this whole Glutamax brouhaha has got me thinking about my little Dutch Pinoy. His dad has hazel eyes, light brown hair, and the kind of white skin that turns angry red under the sun. While it is too early to tell exactly how he will look as a teenager, it is safe to say that his Caucasian genes will always be undeniable.
When i was pregnant with him, a friend of mine joked that since he would probably be good looking due to his Eurasian blood, smart due to genetics (heh 🤓), and educated due to social expectation, he only needs to manage his body mass index and the world is his oyster.
I rolled my eyes then, but it was when i had him and we would bring him to malls and public places that the pervasiveness and relentlessness of our national obsession with whiteness truly became apparent. Once, at a Watson’s store, a circle of maybe 15 people actually formed around him to watch my son perform the impressive, extraordinary feat of…waving. They all say the same thing, “ang puti puti!” That awful Glutamax commercial only affirms what we have constantly been told: that white is valued, brown is commonplace, dark is ugly. If you’re dark, you should want to be white. And if you’re white, you can expect to get perks you don’t deserve.
Once I told my husband that we should probably send him to school in the Netherlands so he can experience being a minority person of color. Racism is academic until one experiences it first hand, and I’m absolutely fine with exposing my child to discomfort and vulnerability to make sure he doesn’t become an asshole. (My husband said we should go all-out and send him to Texas or some other MAGA state. Um, not sure about that.)
But yes, I worry. worry about what it does to a child’s mind to constantly be praised for being “maputi”, to be called guapo because he is mestizo. I worry about what it does to his can-do spirit and his drive if things are handed to him without him having to work hard for them. I worry, most of all, about what it might do to his soul — a soul that i wish will always be sensitive to the many ways the world is wounded and hurting.

So if you know us and are a part of our lives, please, do help me a bit, especially when our son is a bit older and can understand you: Resist the temptation to tell him how white and cute he is. 😊

Hello, my name is Jaye, a first time mom to a little boy born in February of 2018. Let me say this upfront: this is not going to be a blog about how magical motherhood is (it is), how much it has changed me (it has), and how I am now this rock-steady pillar of fierce love and gentle grace (not sure, but trying :)).

This is a blog about learning how to be a lazy, happy mama. That is to say, achieving optimal outcomes with the LEAST amount of energy, effort and resources expended. That is to say, navigating through the crazy jungle of intensive,  FOMO (or FOMKMO – Fear Of My Kids’ Missing Out) parenting and figuring out what our kids truly need so that they can be the happy, thriving, kind human beings we want them to be. There’s nothing wrong with giving our kids what we think is best, especially if we see them enjoying it. What’s wrong is when it becomes a competition — a competition of how young our children were when they started kindermusik, or how long we managed to exclusively breastfeed, or how many hours baby can sleep straight at night. Then I’m too lazy for that kind of oneupMOMship. I say no thanks. 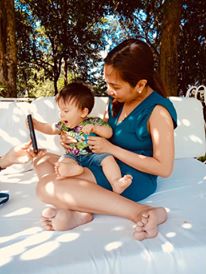 I’ll also use this blog to share tips and hacks that worked for me, as well as those that didn’t. Those with littler babies will learn from my mistakes, and those with bigger babies can laugh at them and maybe see themselves in me.  I’ve had enough of toxic mommy groups filled with sanctimonious mommies with dogmatic parenting philosophies. I believe in kindness and safe spaces, in equality and community, in not not judging moms because motherhood is f&%#ng hard enough as it is.

If these are things you believe in too, come, join my village. Let’s be lazy, happy moms together.